In Remembrance- S Paul, Beyond Photography

Sir John Herschel: How Photography Got Its Fix

And the winner is…

Photography in India, is enjoying a revolution currently. Exhibitions, books and artist talks happen more often, the number of practitioners has massively gone up and photographic gear is available as easily as ever. Take a simple, ten minute walk around a central hub, say Connaught Place in New Delhi, and you shall find a camera across the neck of every fourth person that you see. E-commerce has kicked up a storm in the last couple of years, and a DSLR is now very much in the reach of every youngster, who is very much eager to spend his or her first salary cheque on it. Compact cameras and cell phones have opened up another world all together. However, there was a time, not to long ago, when it was not so. There were only a handful of camera stores, that sold limited amount of equipment. Brands and choices were very limited. Cameras were available mostly through smuggled in sources such as across the border from Nepal or from the farther North East borders. Some came in from Singapore or other such near by countries. Even before that, the laws were very stringent, there was high taxation and fee. Most cameras that were brought in by camera stores was brought in to facilitate the demands of foreign embassies and councils in India and then the surplus would be sold in the Indian market. That was the only way of getting a camera into India. Getting a piece of gear into the country was near impossible as any camera gear brought in would be met with a very high custom duty. This law in particular came to the notice of Shri Rajiv Gandhi, the then Prime Minister of our country, when he held a casual conversation with a few photojournalists. After a while, the custom laws were relaxed. It is because of that decision that we have reached our present state, today.

Now,one may wonder, why would a politician be interested in relaxing a law that, frankly speaking, impacted only a small population? It is due to a fact known only to a few. Rajiv Gandhi had and immense interest and love for photography.

Two photo books of his works have been published, unfortunately they are no longer in print and only a few copies are available. Many people and publications, including us are currently trying to unearth, curate and bring out his work to the public.

A popular anecdote is of legendary photojournalist S Paul that he has recounted to me on many occasions. The day was 3rd November 1972, Smt. Indira Gandhi was to inaugurate the Pragati Maidan in New Delhi. Rajiv and Sanjay Gandhi where there in attendance, beside her. Mrs. Gandhi approached the ribbon and paused in front, with a scissor in hand, waiting for the press gallery to settle in and get ready. Paul stood in the middle, ready as always. In a split second Paul noticed a flock of migratory birds flying in the sky, and immediately switched over the a wide lens and fired away two quick frames. The loud shutter of a film SLR was more than audible in the pin drop silence of the crowd. As Paul brought his camera down from his eye he saw Rajiv Gandhi, had also noticed the same. “He later smiled and pointed towards me in recognition and appreciation” Paul says.

Today, on his 71’st Birthday, in remembrance, we bring to you a small, special extract written by Smt. Sonia Gandhi in the India Today dated Oct. 31st 1994. The extract is originally from a book titled “Rajiv’s World” published by Viking, sadly, it too is no longer in print. In the extract she talks, fondly and closely of Rajiv Gandhi’s relation with his cameras and his photography.

We publish the extract as it is, barring a few formatting changes. Unfortunately, the published photographs are not of optimum size for easy viewing in the original article.

Rajiv’s photography was to him a source of immense pleasure and satisfaction. He shared this interest enthusiastically with his family and a few close friends. He made enlargements of photographs he liked particularly, and these he had framed and carefully arranged on the walls of his study.

A publisher friend had urged him several times during the 1980s to author a book of his photographs, but he invariably declined.This was not just owing to his innate modesty and reticence; it was because he regarded his photographs as belonging essentially to his private world.

The most significant feature of Rajiv’s photographs is that they were intended for no eyes but his own; the communication he sought was between his subject and himself. He never set out, as a professional photographer would, to ‘cover’ a theme, to build up an oeuvre, to seek out images that would contribute to an overall visual ‘statement’.

He took photographs because that was for him one way of expressing his tenderness for those who shared his life.

As a medium, it linked his inner world of feeling and expression with the outer world of technology which always fascinated him. He also had an exceptional capacity for concentration; it was a faculty that, in fact, dissolved the normal distinction made between work and leisure.

He immersed himself in every detail with tremendous curiosity and enjoyment until he had mastered the intricacies of whatever activity it was that absorbed his attention. The themes of his earliest photographs were to remain dear to him; members of his family and household, including the pets who were always an essential part of his home.

Even in the black and white images of his boyhood, there are glimpses of originality in both subject and composition: the juxtaposition of his puppet ‘Bing’ against a pillar-framed vista of Teen Murti House, where he lived with his grandfather Jawaharlal Nehru; the spiral pattern created by water drops churned out of a rustic mill; his younger brother Sanjay captured in mid-air leaping across a stream, with their mother in the background simultaneously taking a photograph of both her sons. 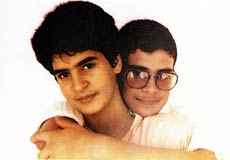 Priyanka and Rahul Gandhi in 1988(Right)

These were the beginnings of his photography. It was when he went to college in Cambridge, and after we met, that the camera became his constant companion; his little Minox practically lived in his pocket.

Most of his photographs of that period are black and white snapshots. He remained with black and white photography right up to the early 1970s, initially for reasons of economy. But even after he moved on to colour transparencies and film, his love for monochrome remained.

Indira Gandhi with Padmaja Naidu in    Allahbad in 1970 (Left)

But in the spacious years before Rajiv gave himself over to politics, there was time in abundance for him to pursue his several interests. He took most of his pictures between 1968, the year of our marriage, and 1984. when he became prime minister.

A fair amount of this photography was at home. While he took numerous photographs of his mother and brother, of his friends and our pets, his most frequent subjects were Rahul, Priyanka and myself. I was always averse to being photographed – as many people are – but with Rajiv it was different: I had no reservations and felt completely at ease.

He kept a photographic record of the children through all the stages of their development, starting at the hospital within minutes of their birth. 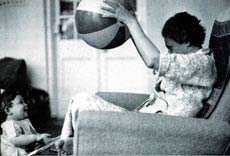 Rahul Gandhi when he was just two years old.(Left)

Holidays and excursions offered Rajiv uninterrupted spans of time as well as an increased range of subjects. He photographed people and places mostly in India, but also in Italy and on visits to other countries. His nature photographs in their totality are revealing.

He focused on eye-catching vistas and spectacular wildlife, but found as much to observe and admire in the seemingly ordinary: lake weeds, the tendril of a creeper, a moth, ice formations on a rock, the tip of an elephant’s tail. His approach was always a tranquil and unhurried one, and it is this attentiveness that binds his images into a unity, rather than any specific theme or style. My knowledge of the technical aspects of his photography is limited to recollections of what I observed directly. He preferred to shoot by available light, indoors as well as outdoors, and seldom used artificial lighting or reflectors. He had several accessories to his Canon A-l camera. which he used for many years until he switched to a Nikon.

He gave that away to my sister when he was presented with a Minolta. From our visit to Lakshadweep onwards he used a Leica. He kept himself abreast of technical developments in photography and read books on the subject.

He enjoyed ‘talking photography’ with friends who were keen amateurs or practising professionals, and once or twice for fun did some colour experiments or work which bordered on professional photography. If he was present when photographers came to the house to take pictures of his mother, he would sometimes get out his own camera and join them. Though he always spoke of his photography simply as recreation, it meant more to him than any of his other interests. In the ham radio, in his mechanical workshop and in landscaping, he found a channel for his curiosity, his energy, his sense of order and harmony.

Photography went much deeper. Throughout his crowded public life, his camera often accompanied him on his travels around the country, even though he knew he would have little opportunity to use it.

Sometimes during his lunch hour at home he would pick it up and shoot a few pictures. It was like an extension of himself.

Rajiv’s camera was for him a means of observing and honouring life in its manifold forms – and of expressing the great love and joy that lived within him.

The extract was originally published here.

One thought on “Remembering Rajiv Gandhi – the photographer”

Read on the go

Let us feature your work!

Writing Through Light is dedicated to showcasing the best photography from India and to publishing work that may otherwise go unnoticed. If you are a photographer, videographer or film maker and are doing something interesting, send us an email (editor.wtl@gmail.com) regarding the same, and we would be happy to feature you on our website.